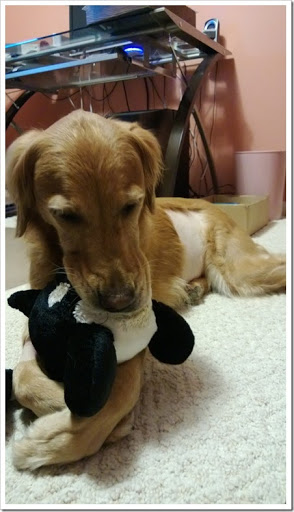 We just arrived back in Austin with the golden girl. She has a bit less hair than when we dropped her off, but she was EXTATIC to see us. Earlier today we got the news from the docs at Texas A&M Small Animal Clinic that Ruby’s platelet count was up to 66,000 and that was good enough to bring her home. (When MJ got the news I was in the middle of my teaching my web cast so she quietly wrote it on the white board in my office.)

Now that she’s home it’s going to be pretty calm, no interactions with dogs and no agility training until she back to healthy. The drugs she’s on suppress her immune system, so she can’t fight infections. (Think Bubble Dog)

Ruby rode home with Shamu, but didn’t get into the “zone” until entering the house. After a roll in the yard she grabbed Shamu and headed to the office with me to watch me post this update. You can see where the clinic shaved her for her ultrasound (which was negative!)

The doctors at TAMU were awesome. They care so much for Ruby and it appears that Ruby really liked them because as she was greeting MJ and I she was also mashing her head into the docs in her ever persistent need to be loved-on. After a quick good bye to Renee we headed home.

Thanks to everyone for their words of support. We’ll have updates as Ruby works through this next phase of recovery.