The Word You NEVER Want to Hear 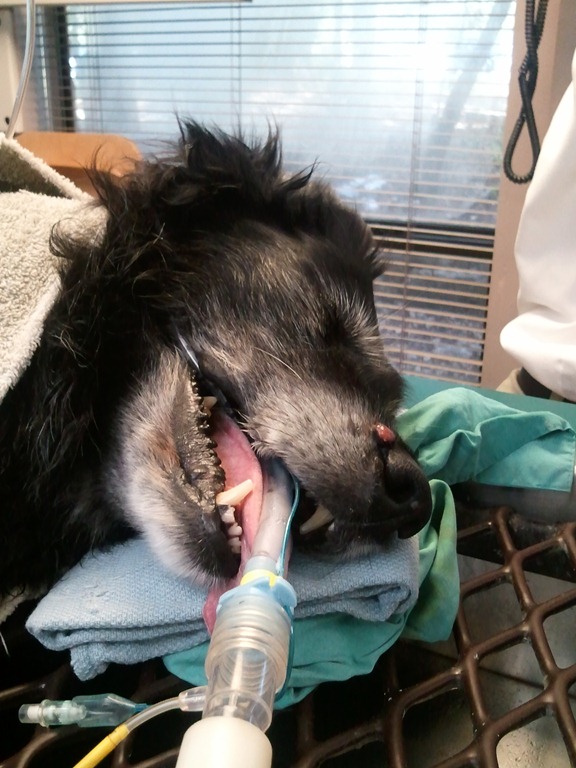 It has been a crazy couple of weeks. They started with the words “Malignant Melanosarcoma”. To be honest, I stopped listening after “Malignant”. It all started as a growth on her nose that would bleed when she rubbed it. We quickly scheduled surgery to remove the growth and, since she was already under anesthesia, a dentistry. I LOVE my vet and they tolerate me, so I took the day off to be with my unconscious dog while they ministered to her teeth and lumpy nose.

As Chris began the dentistry she pointed out the growth on Willa’s palate that, without the dentistry, we never would have noticed. Willa has a black palate, this was a 1.5 cm white squishy, spongy spot next to her molar. We showed it to Brent, Willa’s surgeon, and his face gave me a glimpse of what I was in store for the next few weeks. If we were playing poker, Brent’s face told me we did not have a winning hand. He said “Let’s biopsy that and see what we’re up against.” but his face said “We’re up against something bad.” Having a backstage pass to your dog’s procedures has it’s drawbacks, the professionals don’t have a chance to temper their responses when a dog they have come to love run up against mortality. At that moment he was a friend giving another friend some hard news.

This is the spot just after the biopsy, so it looks a bit worse than before we messed with it. 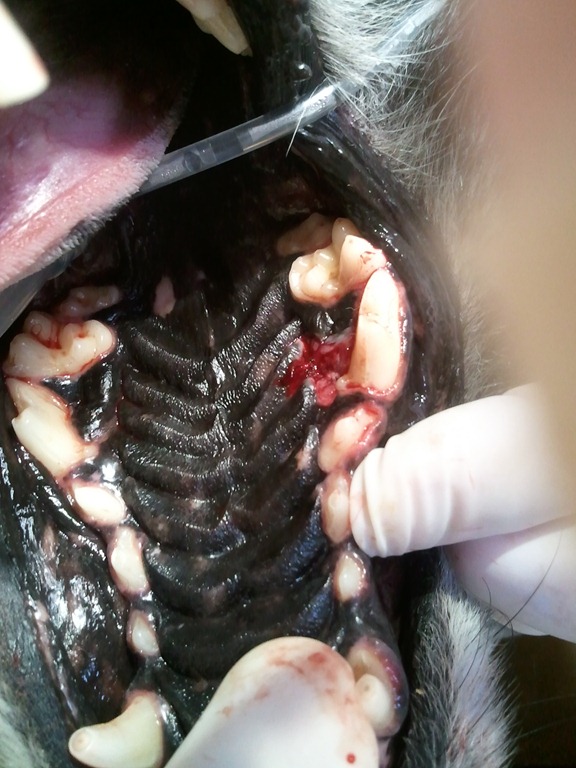 The surgery was uneventful. Brent skillfully removed the mass on her nose and biopsied the spot in her mouth. During the dentistry we discovered a broken front tooth, so we removed that too. Everything was sent into pathology for testing so we would know what we’re up against.

I always wanted to be a Vet. Life had something else in mind, but while I was a Vet Technician I witnessed the hardest part of the job, over and over again. That part where the professional has to deliver the worst possible news, add some hope, and temper it with options and reality. Then cut through it all with love and a PLAN.

Willa’s Vet is Angela, she has known Willa since she was 6 weeks old. Willa was 6 lbs. and could fit in my cupped hands. Angela loves Willa, she takes pride in her accomplishments and brings her children to see Willa when we do our public demos at the Austin US Heroes Air Show. Angela had to deliver the news of Willa’s test results.

The Good News: The bump on her nose was removed and has clean margins. The one in her mouth is small and there is a great doc nearby who has had success treating this kind of cancer. I have already talked to her and she will see you right away.

It’s hard to classify folks who choose a career where all the news is bad. Some news is “less bad”, but the reason you are talking is because it’s all bad. Had I met Raquel at a cocktail party I would say she is a bit quirky with a delightfully dry sense of humor. She’s very Texan, with real stories about real animals that she has loved through the years. She wears her heart on her sleeve and fell in love with Willa on sight.

We reviewed the situation from every angle and talked about every outcome. She was adamant that one thing not change: LOVE YOUR DOG! Willa has no idea that she is sick, that should not change.

We talked about options and decided on a combination treatment of a Melanoma Vaccine, which has been developed for dogs, and radiation. Texas A & M is installing a new machine, but they are not up and running yet, so Willa is going to return to Baton Rouge, LA to the LSU Vet School for her radiation treatment under the supervision of Dr. Geiger, DVM.